How is the President elected? 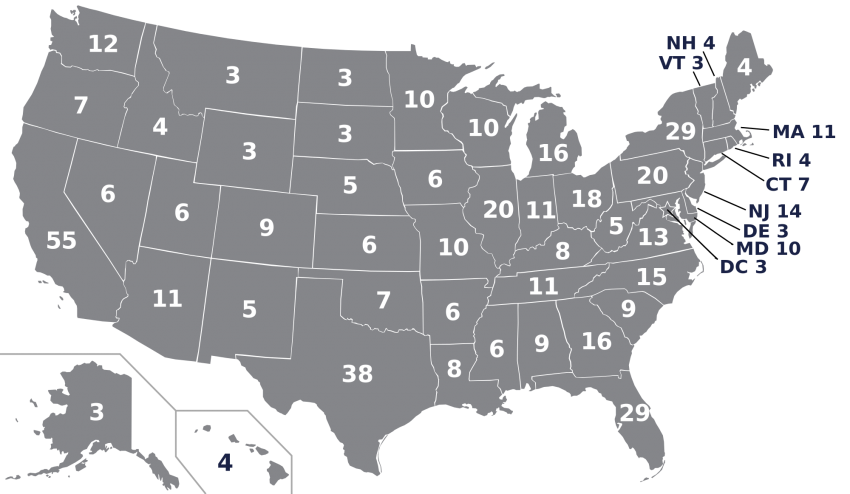 The United States has a representative democracy. This means the people elect representatives who then vote on policies. This is in contrast to a direct democracy, where the citizens themselves vote directly on policies. Furthermore, the US representative democracy is a presidential democracy with separation of powers between the courts of the judicial branch, the Congress that embodies the legislative branch, and the Presidency, which is the executive branch. These three branches are put in place for checks and balances, so that no single entity such as the president will wield too much power.

The President is elected by a national constituency during the general election, which means that all those eligible to vote from every state in the US can help decide who should be in the White House. This is done through a process that is run by the Electoral College, which consists of electors from each state (seen on the picture above). These electors will cast their votes on the candidate that received the most votes in the elector’s state. When this system was set up by the founding fathers, electors did not have to follow the decision of the voters, but today electors almost always cast their vote for the candidate who had the majority in his or her state. This means citizens vote in their own state and the candidate that receives the majority of votes from that state wins all of its electorates/electorals’ votes (except in Maine and Nebraska where each district cast their own vote). A state’s number of electorates are determined by adding its number of senators with its number of members in the House of Representatives. The aggregate number of electors is 538, which means to get a majority to win the general election and become the President of the United States, a candidate must get at least 270 electoral votes.  This also means that even though a candidate wins the popular vote (the % vote from all voters (not electors) across all states) he or she might not win the 270 electoral votes. This happened in 2000, where George W. Bush lost the popular vote to Al Gore, but won enough electoral votes to become President.

However, before even becoming a party’s candidate for president, the Democratic and Republican candidates must first win their party’s nomination. This is done through primaries, also called the Primary Election and Caucus Election. These primaries and caucuses can be open for all or they can be closed, which means that only officially registered Democrats or Republicans can vote for their favorite Democratic or Republican candidate, respectively. This process starts in February of an election year and ends in June the same year with one candidate winning his or her party’s nomination, which means that candidate will become either the Democrats or the Republicans’ presidential candidate. Each party will find a candidate this way, unless there is an incumbent president, since it is rare that an incumbent have an opposing candidate for the nomination within his own party. These two candidates will then, along with any (for the most part) insignificant third party and independent runners, enter the general election, described above.

One thought on “How is the President elected?”