When a child receives a big and expensive present for Christmas from one uncle and maybe a smaller and inexpensive one from another uncle, the child tends to favor the first uncle. Maybe the same can be said about political candidates and their contributors? Do rich interests have greater access and influence in politics through the favor of political candidates compared to poorer interests?

If you have read the other pieces about Money in Politics, it has become clear that anyone, who wants to be elected or re-elected in American federal politics, will require a vast amount of money to have a competitive political campaign. Furthermore, due to the Permanent Campaign (which you can read about here), a candidate will have to consider how to fund his or her re-election, rather soon after entering office. Hence, aspiring candidates, who are not wealthy (like this guy) and willing to, primarily, spend their own money, will need considerable contributions and support from their party and interest groups and PACs. These circumstances have created a dependency for candidates to receive “soft money” from non-political party sources, i.e., outside sources such as interest groups. This article will look into the American people’s representation among these groups and see if both the rich and poor uncle get treated equally.

Candidates receive donations from many different interest groups. There are big interest groups such as the American Association of Retired Persons (AARP) with over 37 million members, who each pay $16 a year in membership fees alone. Along with interest groups representing law firms, securities and investment companies, health professionals, the real estate industry, oil & gas, banks and insurance companies, AARP contributed the most in donations to members of Congress in 2014. This can be seen in the table below. Then there are unions, for the public sector or transportation industry, e.g., which still have numerous members but which are contributing considerably less than the before mentioned groups. The Unions’ interests are in many cases aligned with those of the middle class, such as fair wages and job security, but they lack the resources of groups from other industries. As it can be seen in the table, the interest groups from these industries invest substantial sums in lobbying activities. 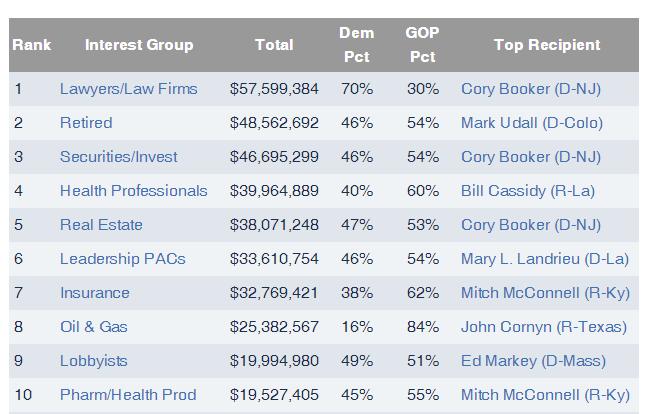 As it can be seen in in the table above, the big industries and their interests are well represented, whereas interest groups promoting the poor’s causes are not to be found. Although, there are many reasons as to why interest groups that represent the poor lack the same resources as other groups. Firstly, the poor as a group in the US is divided in terms of geography, culture, ethnicity and even language. Secondly, because of this division and the, in certain cases, absence of access to information and internet it is difficult to recruit, unite and rally members. Lastly, members will not be able to afford high or any membership fees or donate money to political contributions, due to their economic situation. Additionally, labor unions have lost much of their power and are not able to lobby for the middle-class interests, competitively. In other words, when it comes to interest groups’ means to contribute to the increased spending of politicians, certain groups are able to donate vastly more money than other groups.

The American politicians’ dependency on “soft money” contributed by interest groups seems to have created a political and democratic problem. Despite cases such as the Abramoff-scandal, it does not appear as if Washington is more corrupt than it was before the Permanent Campaign and the increase in campaign costs, which began in the 1970s. However, even though the access to politicians, and even the political influence it can provide, are arguably unchanged these past decades, the price of this access and influence has increased dramatically. In itself, this might not be a problem for the American political system and democracy, however, when the price gets too expensive for particular groups of society, then other and wealthier groups will have an unfair and undemocratic advantage, when it comes to lobbying their interests. In other words, the lobbying industry and the access and influence of interest groups is not representative for the whole society.

That conclusion could suggest that a politician, who is facing a costly re-election, is more inclined to listen to the concerns of a wealthy interest group rather than a poorer group. This can cause a representational problem, since an interest groups wealth and power is not always determined by the number of members and supporter it has. A study conducted around the period of 1999-2002 on the lobbying of 98 political issues in Congress reached a somewhat similar conclusion: “Clearly the universe of issues in our sample reflects the mobilization of interest groups in Washington, and this mobilization is highly skewed away from the disadvantaged.” The less resourceful and their interests are not able to mobilize and lobby as effectively as those with more wealth. Consequently, the wealthy interest groups, regardless of how broad or narrow their interests are, have disproportionally more access to political influence, than their disadvantaged counterparts do.

Expectedly, the wealthiest interests, both groups, companies and individuals, utilize the fact that they have an advantage, when it comes to the lobbying of their interests. As mentioned earlier, the top contributing industries are also some of the richest, while, unions and interest groups that represent non-profit organizations and the poor spend far less, when it comes to political contributions and lobbying. To be specific, the wealthiest contributors’ share of the aggregated amounts of donations was in the 2014 midterm elections was $1.18 billion. This amount of money was contributed by a little fewer than 32.000 donors, which correlates to 1/10.000 of the total population of the US. As illustrated in the pie chart above, this one percent of the wealthiest one percent donated 29% of the total amount of disclosed contributions in 2014, which is an increase of 8 percentage points compared to the previous midterm elections in 2010 (where the figure was 21%). This means that a miniscule percentage of the American public are contributing almost a third of total disclosed donations, which seems highly skewed. Furthermore, following the Citizens United v. FEC Supreme Court case from 2010, the numbers have tilted even more, suggesting that the wealthiest interests are contributing even more money to the contributing-depended political candidates.

However, it should be noted that the wealthiest interests do not always get the political influence they want. According to the before mentioned study, many of the political issues that were examined in the study did not always turn out the way the wealthiest interests preferred and lobbied. Many expensive lobbying efforts, which tried to either promote or hinder a certain legislation, failed in doing. Although, in many of these cases, an equally expensive lobbying campaign pushed for the opposite outcome on the same legislation. In other words, the interests of the rich do not always get the political influence they want, however, in many cases that is because those interests are competing with other wealthy interests. 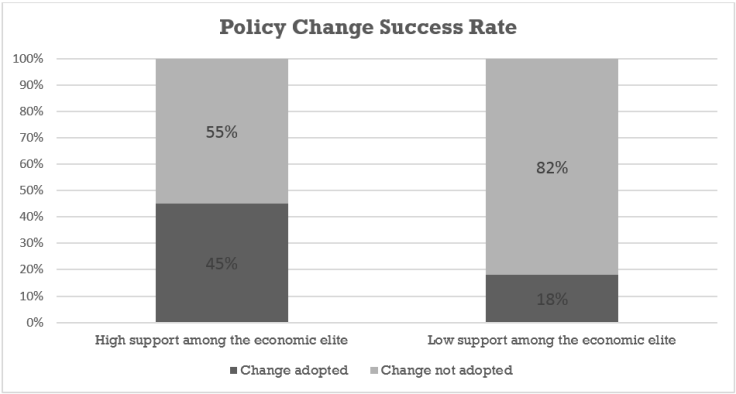 Yet, this only indicates that the wealthy interests spend more, but this does not necessarily mean the political candidates listen more to those who brings them big gifts, i.e. campaign donations. However, a recent study, from 2014 by two university professors, have reviewed the answers to almost 1.800 survey question from the period 1981-2002, regarding public policy issues. They separated the answers according to income levels and, then, determined when each income levels and interest groups had their preferred policy adopted. The study’s analysis indicated “(…) economic elites and organized groups representing business interests have substantial independent impacts on US government policy, while average citizens and mass-based interest groups have little or no independent influence.” As it can be seen in the table above, the result of the study showed that proposed policy changes, which had high support from the economic elite, were adopted approximately 45% of the time. Conversely, proposed policy changes, which had low support from the economic elite, were adopted in approximately 18% of the cases. Arguably, this supports the hypothesis suggesting wealthy interest groups gain more influence through lobbying.

In conclusion, it seems suggestive that the lobbying activities of wealthy interest groups pose an impact to the democratic process in the US.  If some interests have more influence than other do, not because a majority of the people supports these interests but because they are supported by those with wealth, it provides an uneven or unequal representation. This representational problem is an impact on the democratic process, since the people are not evenly represented when it comes to influencing the government through lobbying activities. In other words, politicians seem to favor the rich uncle who provides the big contributions and wants to keep him happy in the hopes of getting another big present at the next Christmas – or election…